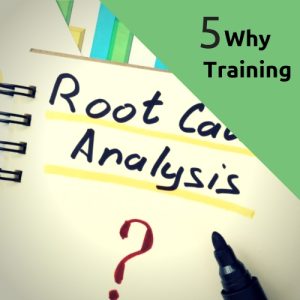 One of the key business success factors that I have followed throughout the years is that of always trying to determine the root cause of any business problem. I focus on the root cause because anything less than that will not allow you to solve the problem completely.

The reason that this is important is because most people only look as far as the symptoms that are causing the problem, not the root cause.

There is an easy way to determine the root cause of a problem and it is called “The 5 Whys.”

Many years ago the founder of Toyota Corporation, Sakichi Toyota, developed “The “5 Why” technique that was and is used within the corporation’s manufacturing methodologies. It is still considered a critical component of problem-solving at Toyota today.

“The 5 Why” process is simply asking the question “Why” 5 times. Let me give you an example of only getting to the symptoms of a problem.

-My car won’t start (the problem)

-The battery is dead (the symptom)

So the solution to the problem in this case is to recharge the battery. But the following week, you have the same dead battery problem. So you go to the auto parts store and purchase a new battery because the old battery apparently will not take a charge.

However, the following week the new battery is also dead.

So while you addressed the symptom of the problem, you really did not solve the entire problem because the battery continues to go dead.

If you are looking for assistance with completing a root cause investigation, I made a book to help you out, check it out on Amazon here

-My car won’t start (the problem)

-The battery is dead

-The alternator belt is broken

-It was worn and I didn’t replace it

I was too lazy

So the root cause as to why the car won’t start is the person’s laziness, not the dead battery. The dead battery is a symptom. The key is to urge yourself not to assume anything and to avoid logic traps. Instead, the solution is to follow the symptoms through “The 5 Whys” until you find the root cause of the problem.

Often times, you will see that the root cause of the problem is not identified because you have a flawed process in place or no process at all. In this case you should be asking the question, what is the process that is in place, if there is one, and if so, is it the right process.

In addition, a key phrase to keep in mind in any “5 Why” exercise is that people do not always fail. Sometimes process do.

Identifying the root cause of any problem is critical to your success. Most people only identify the symptoms of a problem and then, after addressing the symptoms, wonder why the problem continues to reoccur.

View the 5 Why Method Training below: