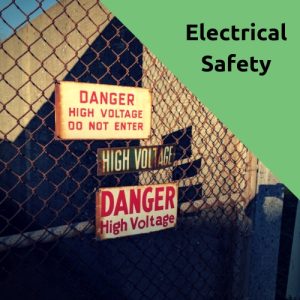 Every quality safety and health program provides measures to control electrical hazards. The information provided in this training should be helpful in getting a better understanding of electrical safety. The responsibility for an electrical safety program should be delegated to someone with a complete knowledge of electricity, electrical work practices, and the appropriate OSHA standards for installation and performance.

Everyone has the right to work in a safe environment. Safety and health add value to your business and your workplace. Through cooperative efforts, employers and employees can learn to identify and eliminate or control electrical hazards.

Electricity has long been recognized as a serious workplace hazard, exposing employees to electric shock, electrocution, burns, fires, and explosions. According to the Bureau of Labor Statistics, in 2016, 134 workers died from electrocutions, which represents a decrease from 174 in 2011. What makes these statistics tragic is that most of these fatalities could have been easily avoided.

The first step toward protecting yourself is recognizing the many hazards you face on the job. To do this, you must know which situations can place you in danger. Knowing where to look helps you to recognize hazards.

What are Volts? A Volt is a measure of the electrical force that seems to push current along. Think of voltage as a lot of water stored in a high water tank. Because the water tank is high, the water will have more force behind it as it flows down the water pipe to your home. This is why they put water tanks up high! If the same tank was placed at ground level, your water pressure would not be as great. By the way, the symbols commonly used for voltage are “E” or “V”.

What is an “ampere?” An ampere is the unit used to measure the amount of electrical current. Amperage is often referred to as “current” by electrical workers and engineers. Let’s go back to our water tank. If the diameter of your pipe coming from the water tank is large, a lot of water (amperage) will flow through the pipe. If the pipe’s diameter is small, a smaller amount of water will flow through the pipe. If you need a lot of current (many amps) to operate your equipment, you’ll need large wires to run the current or they’ll burn up! The symbol for amperage is “I”.

Effects of Electrical Current on the Body

The temperature of the wires can be high enough to cause a fire. If their insulation melts, arcing may occur. Arcing can cause a fire in the area where the overload exists, even inside a wall.

If the breakers or fuses are too big for the wires they are supposed to protect, an overload in the circuit will not be detected and the current will not be shut off. Overloading leads to overheating of circuit components (including wires) and may cause a fire.

Hopefully you have learned about electricity here, it presents a hazard, which can be unseen and is often overlooked.

View the Electrical Safety Training below:

electrical safety u of cal